So last night after I finished writing the blog, the power went out while Julie, my roommate, was in the shower. I was brushing my teeth with bottled water since the water here would make us sick. Both Julie and I said “oh no!”

Julie thought to bring EVERYTHING on this trip, including poop smell eliminater spray. With that said, she had a small flashlight sitting on our counter. It was pitch black in our room. No moonlight shone through at all. I took a couple steps out of the bathroom, I got horrified and ran back. I told Julie I was too scared but I didn’t want her to fall so I knew faced my fear. I needed a flashlight to find the flashlight! I went back in the room repeating “Jesus, Jesus, Jesus, Jesus” and I felt better. I knocked the flashlight over then grabbed it. I shined it on the ceiling so she could get out. Accomplished! Since the power went out so we chatted until 1am then we were like we need to go to bed.

This morning, Julie was raring to go! She was up making tons of coffee. Pastor saw the lights were off and thought I was still sleeping in my bunk so waited. Finally, he busted down the door to get his coffee. He wanted me to entertain him so I got up. When me and Julie are together, the room roars with laughter lol

We chatted for a bit and then got ready for church. We dressed in our nicest skirts and tied our bubushkas, which took a little while because they kept coming undone.

Victor, our driver, said he was going to pick us up for church a little before 9am (church started at 10am we were told) so we were ready to go around that time. Nigerian time varies around 40 minutes after the designated time here. With that being said, we weren’t worried at first when Victor was late, but he is usually on time waiting on me and Julie. He hoped nothing was wrong when it was almost 10am and Victor still wasnt around to pick us up for church.

Since Pastor Marc was preaching, we said that they would know we were missing once it got to the sermon. Eventually, he showed up to get us and explained that it was sunday school that started at 10am, not church. It was all good! We were just happy he was ok.

We arrived to the church on another bumpy road. Reverend Ayuba’s church, which is where we attended, was a church plant by City Ministries (the organization we ate traveling with) located inside a school. The kids were still in classrooms for sunday school. They had 3 big rooms filled with kids!

After a mini tour, we went in this large classroom and inched our way into a row. Instead of pews, they had desks. We were confined and wondered how we would dance. The service was a bit different than I expected.

Instead of planned worship, one of the congregation members would just start singing at the top of their lungs and everyone would join in. Sometimes people would come up and play drums or other instruments along with the singing. Everyone had great sets of lungs! They sang so loud! A couple guys went to the front and danced. Me and Julie were trying to move around and dance. We only stood twice for a little bit and sat during most of the songs. Unexpected. I sat less there than away my home church. It was more lively sounds that they were singing though asking with a couple of guys dancing a little bit.

Pastor Marc was sitting up front during the singing when a little kid walked up to him and wanted to sit on his lap. While the kid was on his lap, all of a sudden he felt something wet and warm run down his leg. The kid peed on him right before he was about to give the semon! Here, Victor says it’s a blessing when you get peed on by a kid lol

They spoke in Hossa but I think they gave what sounded like announcements and had offering. Peter, one of the leader of City Ministries, gave us Nigerian money for the plate. Then it was Pastor Mark’s time to share the sermon.

He did pretty good for preaching with a pantleg saturated in pee! It is hard talking with a translator because you have to pause after every sentence. The sermon also lasts longer. If you know Pastor Marc, he walks and paces the whole time whole he preaches. It is always hard snapping a picture since he moves so much but I finally got a few.

While speaking about Daniel and not being afraid of man, he walked behind the interpreter and almost paced back into him! He was gunna run him over lol. A couple times the interpreter had him repeate what he said, which he said kinda threw him off, but it went well. The people were responsive.

We had an opportunity as a mission team to share something with the congregation. Barb and Hedi shared about their church, told them to go out and disciple others, and read a bible verse and I shared something similar to what I said to the woman in the brothel (see my Africa day 3 blog post). Julie shared some encouraging words with them as well!

After the service, the kids came over to me and Julie so we were hanging out with them. I thought I heard my name and seen Barb with her head sticking in the widow that we were going to take a picture. While we were making our way out, we gave hugs and handshakes. Two ladies were wearing pretty matching African dresses and they said they were sisters after I asked them. They were all smiles!

We got a group picture with the church and afterwards I was swinging the kids around and Julie was dancing with them! 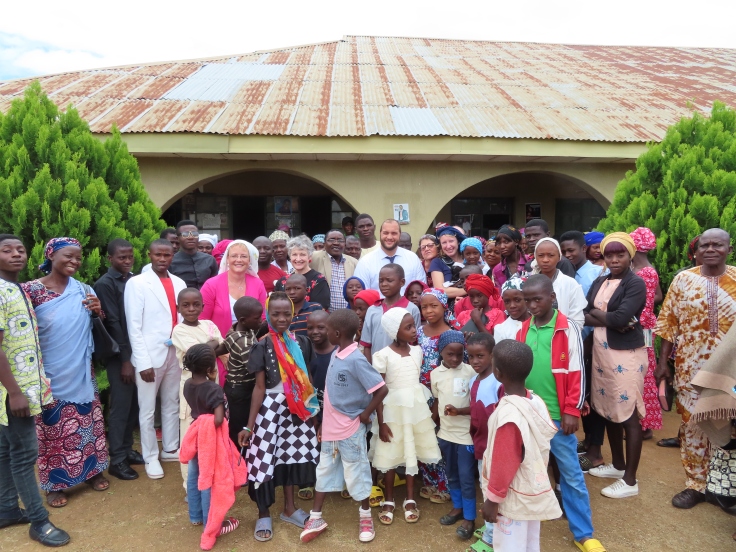 Once we made it back to the bunkhouse, our seamstress was there so we chose our dresses, material, and she took measurements. I’ve never gotten fitted for anything before so it was exciting choosing exactly where I wanted my sleeves to end, the dress to end, and how I wanted it to look like! I chose a yellow pattern with purple. Julie is getting 3 dresses. Get this! They are only $12 ($6 for the material, and $6 for the sewing). We gave them extra because they are worth so much more. The seamstress is going to college right now so she was happy for the business.

We ate lunch and while Julie was getting an ankle message by Martha, our cook for the weeks, Victor came to pick me up for open volleyball! He is a volleyball coach and referee so invited me to play with them.

The volleyball was at Hillcrest College, which is just down the road from where we are staying. There were 2 nets set up and the court was cement. Everyone was pretty good. The majority of the players went to or taught at the school. Victor spikes pretty much plummet into the ground but I felt good when I was able to get a couple serves past him! My team said I did great with setting too.

After playing for 2 1/2 hours, I arrived back sweaty. Not to long after, the power went out so I couldn’t take a shower. Dinner consisted of chicken, tomato sauce, and spaghetti. The kitchen crew cooks with gas, so the power didn’t effect dinner.

The conversations during and after dinner were interesting to say the least. We started talking about the bathrooms at the orphanage and it got us on the subject of the worlds longest poop, which is 26 feet long.

Of course, Julie and I laughed and stayed up until 2am! It was quite a night! We are having so much fun!